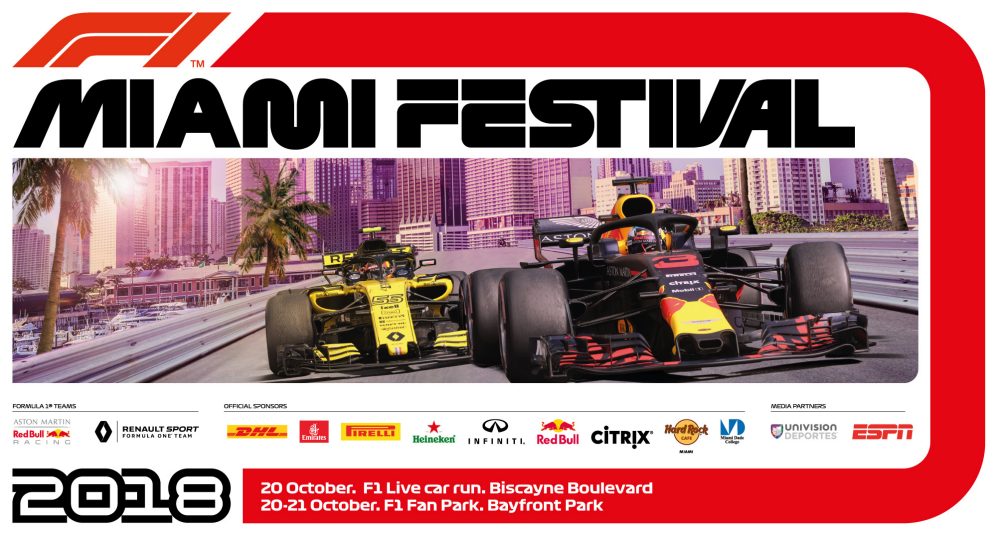 Formula 1, the pinnacle of world motorsport, will light up downtown Miami next month when the city plays host to the final F1 Festival of 2018. Taking place on Saturday 20th and Sunday 21st October, the event will run alongside the Formula 1 Pirelli 2018 United States Grand Prix in Austin, Texas.

Unleashing the spectacle of F1 for fans in the USA, will be racing giants Aston Martin Red Bull Racing and Renault Sport Formula One Team, as well as two-time F1 World Champion Emerson Fittipaldi, who will be driving his Championship winning McLaren M23 along the streets of Miami – supported by a range of other iconic cars, past and present.

Silk City, Diplo and Mark Ronson’s exciting, new collaborative project, will headline the evening concert starting at 18:30 on Saturday 20th October in the F1 Park. Diplo, born Wes Pentz, and Ronson named Silk City for the Philadelphia institution where they first met in the early 2000s. Longtime friends, the project is the two multi-platinum, Grammy-winning producers’ first official collaboration. Described by the pair as “a homage to some of the greatest dance music cities Chicago, London, Paris, Detroit,” Silk City have released a string of impressive singles over the summer: “Only Can Get Better” with vocalist Daniel Merriweather, “Feel About You” featuring Mapei, “Loud” featuring Goldlink and Desiigner and, most recently, “Electricity” with Dua Lipa, currently topping charts worldwide.

They will be joined at the F1 Miami Festival by a host of other local talent in what promises to be an electrifying performance for fans. The concert will be free and further details on admission will be released in the following weeks.

Miami is the fifth international city to host an F1 Festival after London in July 2017, then Shanghai in April, Marseille in June and Milan in August this year. The initiative forms part of Formula 1’s ambition to attract new followers and engage more deeply with existing fans of the sport.

With passionate crowds and unrivalled entertainment, Austin’s Circuit of the Americas has become a mainstay of the Formula 1 calendar and the upcoming F1 Miami Festival demonstrates the sport’s ongoing commitment to the US market.

The F1 Miami Festival will open on Saturday 20th October with the F1 Live car run along Biscayne Boulevard. Fans lining the streets will be able to experience the roar of the engines, the smell of the rubber and the incredible energy that only Formula 1 cars can produce as they are put through their paces on a bespoke city circuit.

Providing the ultimate city centre festival hub, the F1 Park located in Bayfront Park will blend the unique thrills of F1 with the culture of Miami, merging exciting activations and events, music and installations to entertain people throughout the day and into the evening. Across the weekend fans will be able to experience the excitement of the race in Austin, with both qualifying and the race itself live streamed on screens within the park.

What is more, local artists will create bespoke artworks to celebrate the arrival of the F1 Festival in Miami. Young, contemporary artists Jessy Nite and Brian Butler will collaborate on a mural in Wynwood; and muralist and sign artist Sege Toussaint will paint a wall in Little Haiti. Brain Butler will also create a special artwork in Bayfront Park during the F1 Miami Festival.

“America is increasingly becoming a hub of passion around Formula 1 and I am particularly excited about the opportunity to host an F1 Festival in Miami. The success of the US Grand Prix in Austin demonstrates the appetite for Formula 1 in this country and we are determined to bring the sport to even more American fans in the coming seasons.

“Following the immense success of our events in London, Shanghai, Marseille and Milan, I am certain that Miami will follow suit. Miami is a diverse and vibrant city that shares many of the brand attributes of Formula 1, making it the perfect host for Formula 1’s final festival of 2018.”